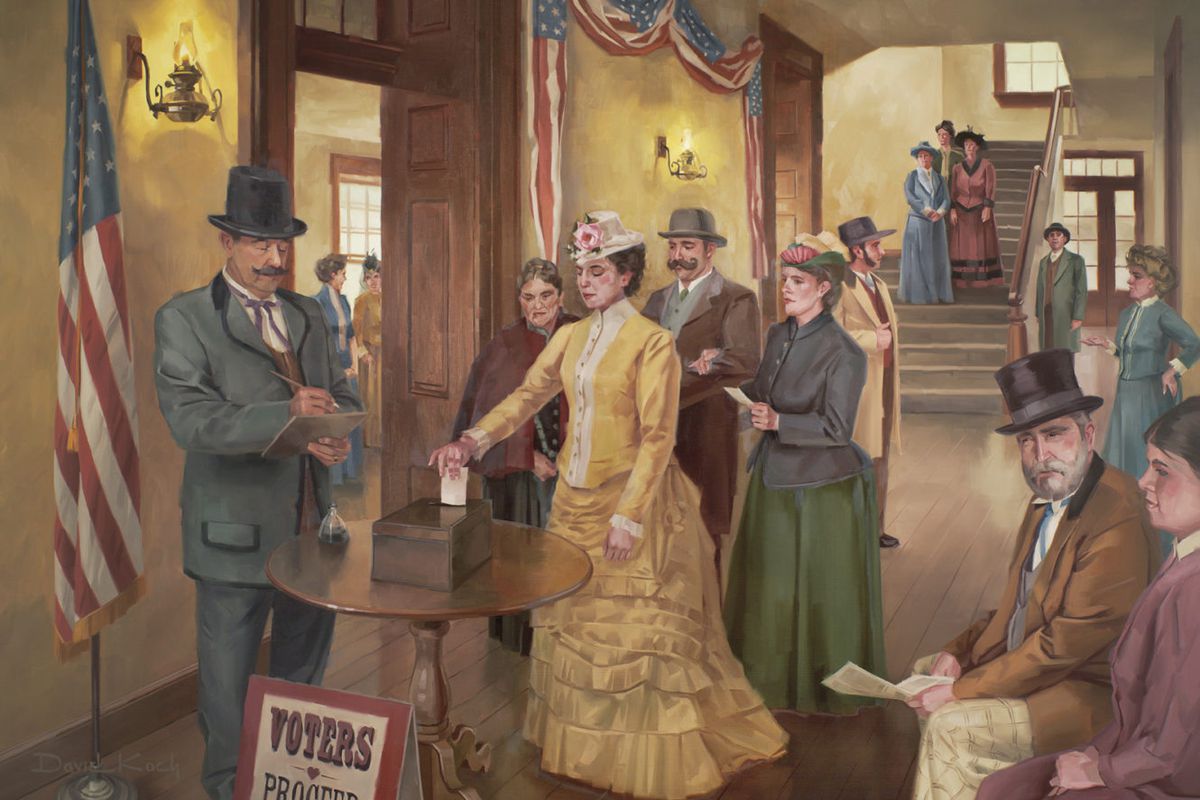 One hundred fifty years ago, Seraph Young, a 23-year-0ld Salt Lake City schoolteacher, amplified the voices of Utah women by casting her first vote in a municipal election.

One hundred years ago, the passage of the 19th Amendment to the U.S. Constitution extended voting rights to white women across the country.

This year’s dual anniversaries inspired “Women to the Front: Perspectives on Equality, Gender, and Activism,” an exhibition by women artists at the Rio Gallery, which hangs through May 8. The title draws upon invitations issued by punk musicians to create a safe space directly in front of concert stages for female fans during the early 1990s Riot Grrrl movement.

Curators Nancy Rivera and Scotty Hill asked Utah artists what themes from the suffrage movement are still relevant, 100 years later, in their work. After extensive research, curators selected work from 15 artists in an all-women show that spotlights diversity in its variety of artistic media, as well as the artists’ backgrounds.

Among the artists are Fazilat Soukhakian, an Iranian photographer now an assistant professor of photography at Utah State University; and Denae Shanidiin, a Korean-Dine’ photographer who makes art out of activism.

After working as a photojournalist in her native country, Soukhakian earned a master’s and PhD at the University of Cincinnati, where her dissertation project, “Here I Become,” explored the politics of gender and sexuality.

She wasn’t familiar with the doctrines of The Church of Jesus Christ of Latter-day Saints when she moved to Utah in 2015, or the conflicts faced by gay, lesbian, bi-sexual or transgender church members. Back home in a Muslim culture, discussing topics such as homosexuality was stigmatized. She thought of America as a place where “everybody is free to practice whatever, and nobody cares.”

She quickly learned otherwise. Students and their friends confided in her their pain in speaking about their sexuality to their Latter-day Saint families. She learned about church teachings that command gay members to be celibate. She learned about Utah’s high suicide rate. “Really heartbreaking stories,” she says.

Anger prompted her to begin photographing gay and lesbian couples, but as she began actively searching for portrait subjects, her feelings changed. “It’s a big thing they are doing,” she says. “They are brave enough to take their love and affection on top of religion. I wanted to show their affection, and their love, and their bravery.”

For her “Queer in Utah” series, she drew poses from classic paintings and sculptures. She told couples she was aiming to depict their bodies and feelings, rather than shooting traditional family portraits. As a newcomer to Utah, she didn’t want to offend church members, so she enlisted former students to offer feedback.

She’s completed 14 photographs, and plans to continue working toward a gallery of 50 portraits. “I’m just very passionate about this project because it’s the right moment to talk about what’s happening in the state of Utah,” she says. “All of these couples are beautiful and gorgeous.”

As an artist and activist, Shanidiin believes the visually pleasing arrangements of words have a power beyond their meanings. As a photographer, she aims “to document the messages that are being spread around at this place and time.”

She combined these ambitions in her artwork for the “Women to the Front” exhibition. Inspired by historic photographs of civil rights and American Indian movement protests, she created a large, hand-lettered sign to lean against a wall, as if a gallery-goer could pick it up and join a movement.

“I’m really honored to be in spaces that might be predominantly focused on other issues besides indigenous issues,” says Shanidiin, who was born in Arizona on the Navajo Nation and raised in Salt Lake City. “I love representing in spaces that might not have voices like mine.”

Her artwork and activism are layered. She paints signs for a living, and also manages social media for the Sandy-based nonprofit Restoring Ancestral Winds, which tells the stories of missing and murdered indigenous women. She’ll create signs for “Utah Must Lead the Way,” a campaign to spotlight the ongoing violence against indigenous women and gay, lesbian, bisexual, transgender and queer people. Her lettering will be featured on 14 pedestrian billboards on 300 South (between 200 East and 200 West) in Salt Lake City. The signs are known as The Temporary Museum of Permanent Change, a project of the Center for the Living City, in partnership with Craft Lake City and City Weekly.

She describes herself as a quiet person, and likes sending messages without using the physicality of her voice. “It’s nice to just stand there with strong messaging that makes people think,” she says.

For her art signs, she says “the words kind of show up,” borrowed from what she is reading from indigenous voices or other texts. Last year, she quickly lettered a sign that read, “Indigenous people are not vulnerable, they are targeted,” the phrase used by a Canadian activist.

Moroni Benally, RAW’s coordinator for public policy and advocacy, wearing a bowtie and a turquoise necklace, held that sign during a protest at the Utah State Capitol last year. Photographer Jonathan Canlis’ image of Benally holding the sign went viral. “That one really resonated with a lot of people,” Shanidiin says, her voice quiet on the phone, but her message loud and clear.