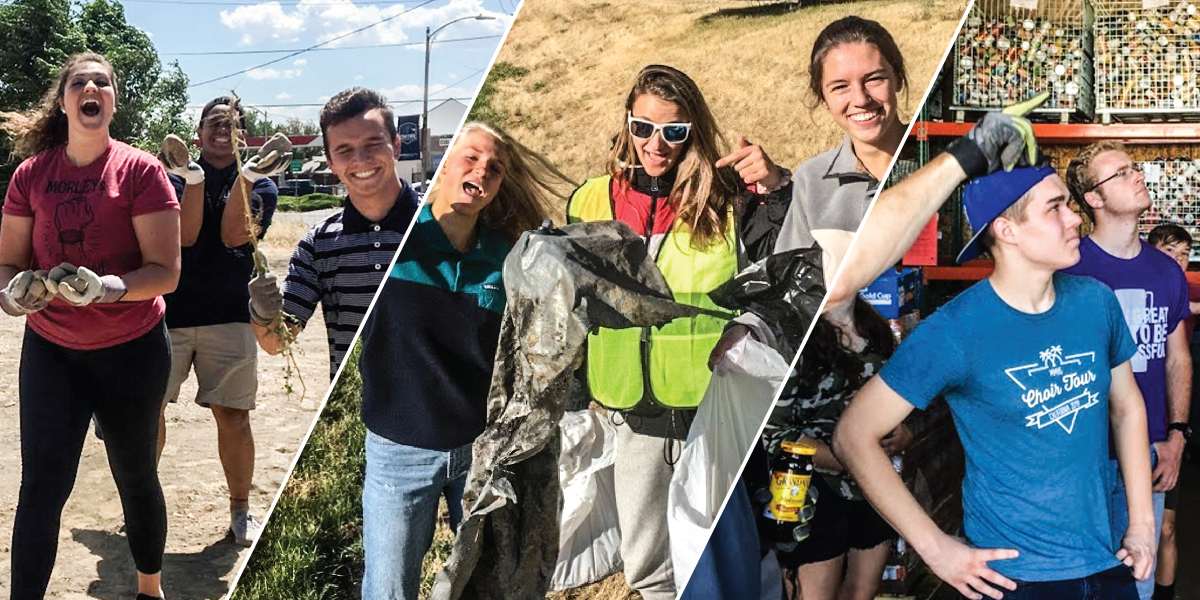 Jace Draper was shocked when he observed a couple of his classmates secretly hiding food under bleachers or in their lockers. High school should be a time to think about having fun at the prom, not worrying about having enough food to eat over weekends.

Combating poverty was Draper’s motivation for the volunteer initiatives he organized as part of UServeUtah’s first youth council.

Carbon County ranks “dead last in health across Utah,” says Draper, a senior at Carbon High School, and president of his school’s Future Farmers of America chapter. He describes his hometown as a place “where everybody knows everybody, so if someone is experiencing a problem, we kind of all experience it.”

Drawing upon his experience on his family’s farm, Draper partnered with the Carbon County Food Bank to prepare seed beds. At the local Boys and Girls Club, Draper taught classes about growing vegetables, and then how to cook and preserve them.

He also recruited 60 high school students to help spread natural fertilizer and then set up hoop houses to extend the growing season for Price’s re-established community garden, which had lain fallow for three years. Some 18,000 pounds of food were harvested from the garden during the 2019 growing season, Draper says.

When teens experience meaningful service, they’re more likely to donate time and energy to such causes throughout their lives, says LaDawn Stoddard, director of the state commission on volunteerism.

That’s the agenda for the new statewide youth council, which last year paired 20 high school and college students with volunteer leaders. Each council member was asked to find community partners to help plan and execute a local service project. Along the way, they were charged with determining how to enlist their peers in their cause.

“It doesn’t matter what you’re doing in your career path, you can stay engaged,” Stoddard says. “We think that’s a message worth discussing.”

Across the state, youth council members followed their interests to organize big and small projects. Seung Joon Lee, a junior at Logan’s Intech Collegiate High School, collects glass recycling weekly from five bins installed near his house, and then transports bottles to the Utah State University recycling center. As part of the project, he records the pounds of glass he collects weekly to make a case for expanding recycling services.

Danny Russon, a Southern Utah University student, organized Give & Grow, a Sanpete County service networking convention. “We brought a lot of opportunities to [potential volunteers’] attention by pulling them to one central location,” Russon says.

In Salt Lake City, Kenzie Campbell, a Westminster College senior, collaborated with the college’s Dumke Center for Civic Engagement to enlist 100 classmates to help Hawthorne Elementary students make blankets for dogs at Best Friends Animal Shelter and decorate the Utah Food Bank’s holiday boxes. Volunteering can be fun, as well as serving multiple goals, says the self-described social justice warrior (who, full disclosure, happens to be a friend). She liked watching fourth and fifth-graders hang out with university students, and hopes the kids envisioned themselves attending college someday.

For example, Sione Siaki, of Utah State University Eastern, originally planned to update playground equipment at a Carbon County park. Instead his project became a long-term partnership planning a “Garden of Hope,” which is designed to serve as a community gathering place.

Russon learned “it is better to have four quarters than a hundred pennies,” explaining that he learned to appreciate a smaller number of more committed volunteers. “I was surprised at how much got done by just a small handful of people looking for a way to help out the community,” he says.

“Leading in a community requires a lot of logistics and buy-in,” Johnson says. “It’s not always a clean process.”

This aptitude test will help volunteers determine what kind of experience they are looking for.  “We all have a lot of things we’re passionate about, and we all have different skill sets,” says Jacob Johnson, UServeUtah’s community engagement program manager. “This will identify ways of making a difference that you might not think about.”